The annual pilgrimage to our nation's capital by scores of Veterans and supportive non-veterans from across this country, is an example of an activity that this chapter has a heavy focus on as a participant. For several years now, many chapter members have been very diligent in making the journey to Washington D.C. to ride in the motorcycle parade aptly named "Rolling Thunder". Therefore, this Chapter's leadership ensures that the Memorial Day weekend is scheduled for the "Tom Poss & Russ Reddick Memorial Ride to Rolling Thunder".

The significance of including Tom and Russ's names to this annual ride to Rolling Thunder is easily understood once you explore the annals of our chapter’s history. Although Tom Poss wasn't a veteran, he definitely was an ardent supporter of veterans and their causes. Tom's untimely passing, along with his accomplishments, led the organizers to dedicate its annual ride to Rolling Thunder and name it the "Tom Poss Memorial Ride to the Wall". By the time the 2008 Rolling Thunder ride had arrived, the chapter had lost another member prematurely.

Russ was a Marine Corp veteran of Vietnam who, like Tom, supported our veterans. Thus, it was only fitting that the "Tom Poss Memorial Ride to the Wall" be renamed to its present day "Tom Poss & Russ "Reddick" Memorial Ride to Rolling Thunder". Tom and Russ were fellow Smoky Mountain H.O.G.® members who participated in our first trips to Rolling Thunder while being Harley® enthusiasts. Their names will forever be synonymous with our Ride to The Wall.

More information on this activity can be found on our calendar or by visiting the Rolling Thunder's website. 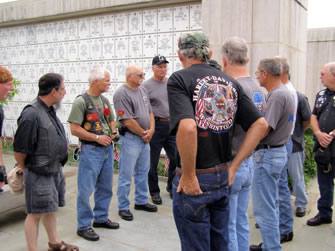